I wrote this post last year for This Happy Place Blog and thought it would be fun to share my holiday traditions with all of my RAD readers 🙂  I’ve made some edits to include info for the 2012 parade.  Enjoy and Happy Holidays to you and your family!

For as long as I can remember, my dad and I have always watched the Disney Christmas Day Parade.  It has become a Christmas morning must-do over the years.  Even though I am now happily married and long gone from the house, my husband and I spend Christmas Eve night at my dad’s house every year.  Christmas morning usually has a lazy start since we stay up very late the night before opening presents and having lots of laughs.  We will begin the morning with fresh ground coffee and Dad will make his world famous pancakes and thick-cut bacon. We’ll take our breakfast to the living room, plop down on the couch and enjoy the parade while we revel over the gifts we opened the night before.

For almost 30 years, the Disney Christmas Day Parade has been a Christmas morning staple on television.  Kids all over the country have grown up watching Mickey Mouse march down Main Street USA with toy soldiers and Santa Claus in tow. This televised parade has definitely changed over the years. It was originally known as The Walt Disney World Very Merry Christmas Parade and aired live on Christmas morning. From the early days, I recall seeing many clips from attractions around the park in addition to the parade, which would entice us to want to take another trip and sparked a lot of begging on my part.

Since then the parade has changed names twice, first to the Walt Disney World Christmas Day Parade and most recently to the Disney Parks Christmas Day Parade which now includes Disneyland and the other resorts around the world. The format has also changed quite a bit. It is now recorded in early December and then broadcast on Christmas morning. They also seem to be including more celebrities to the festivities each year.

Once again, Nick Cannon will be hosting this year’s parade, along with Mario Lopez and Maria Menounos.  Some of the musical guests are Lady Antebellum, Colbie Caillat, and Phillip Phillips.  We can also look forward to a performance from the Broadway cast of Newsies, which promises to be a high energy performance!  And of course the parade will be full of appearences from our favorite Disney and Disney-Pixar characters!

So I know where I’ll be this Christmas morning. Curled up in front of a fire in my PJs, eating my dad’s famous pancakes (hopefully he’s found a gluten and egg free recipe!) and watching the parade travel down Main Street U.S.A.! 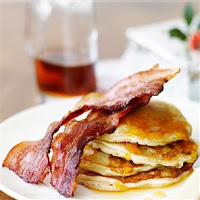 What are your holiday traditions?  Will you be watching the Disney Parks Christmas Day Parade?

Support the Crohn’s and Colitis Foundation of America and Run with Team Challenge!